Saturday Breakfast - back to normal again

But sadly after being 8-1 up, we eventually lost 8-9 to a faster boat and technology. But NZ is so proud of her team who showed dignity, honesty, integrity and great sportsmanship and thrashed Oracle Team USA when the boats were equal and when sailing skills (and not expensive technology) won or lost races.

The team lost the cup but they won the hearts of many. And though we're gutted, in the hearts of many kiwis, they are champions. My heart broke and my tears flowed as I watched a devastated Dean Barker overcome with emotion. But what a guy, what a great ambassador for New Zealand, what a phenomenal role model for children, and what a proud moment for kiwis to watch a team defeated unfairly and yet so gracious. My dad always said that the true test of one's character is during the down times. Dean Barker and his team came through with flying colours. So proud of them.

Yes, one should be gracious in defeat and congratulate the winning team, but Oracle Team USA gets no congratulations from me. A team that started the challenge by cheating (and got caught), in my view, doesn't deserve to win. In any other sport, they would've been disqualified.


"For when the One Great Scorer comes
To mark against your name,
He writes - not that you won or lost -
But how you played the Game."
(from the poem "Alumnus Football")

But how does breakfast come into this?

The races started at 8.15am NZ time and at the weekends we were glued to the TV yelling our heads off for TNZ. And on some days if we were lucky enough to not be in meetings, we also managed to watch a few races online at work.

And so breakfast now goes back to normal. We can eat and drink mindfully, savouring every morsel, and watching the tranquil hills.

And we'll wait again for the next America's Cup when I hope Dean Barker and his team will get a chance at that glory they so deserve and when once again Saturday breakfast becomes a time for eagerly watching races and a lot of yelling and wishing and hoping and praying.

And as the prompt at the Thursday Challenge is Beverages, here's my breakfast line-up! 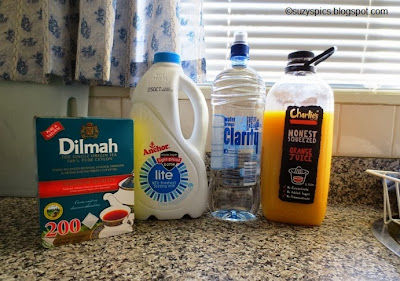 Email ThisBlogThis!Share to TwitterShare to FacebookShare to Pinterest
Links to this post
Labels: Six Word Saturday, Sports, Sundays in my city, Thursday Challenge

Thunder and lightening battling it out

Or was it the Gods? Friday night the heavens clashed, Wellington saw a spectacular light and sound show.

I hate thunderstorms, they scare me. The lightening gives off an eerie effect and the thunder is always so angry.

The lightening was on the other side of the harbour but it always feels like it's close by.

I was glad it only lasted a short while. I had to put my ipod on to drown out the scary sound and luckily the pulled curtains blocked out the lightening. I didn't dare take a picture.

But here's one courtesy tvnz. 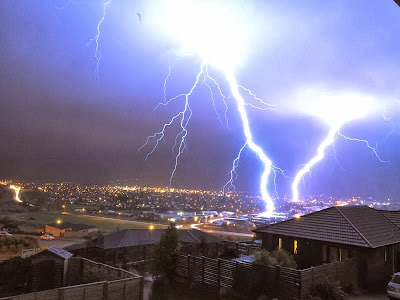 I'm glad this was nowhere near where I live.

I'd much rather have the city look like this - blue skies and calm: 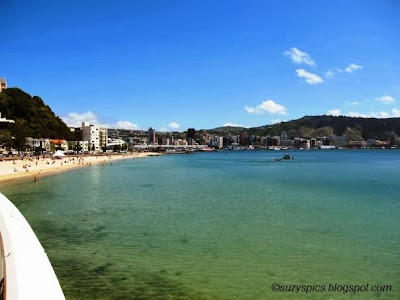 I took this picture from Oriental Bay 2 summers ago.

Email ThisBlogThis!Share to TwitterShare to FacebookShare to Pinterest
Links to this post
Labels: Six Word Saturday, Sundays in my city, Thursday Challenge, Wellington

My neglected blog deserves some TLC

I've been busy the last week with a 7 day blogging challenge over at my blog Someday Somewhere so unfortunately this blog took a back seat and was neglected :( But it's time to give it some TLC.

I'ts been an exciting week with the America's Cup taking place in San Francisco with Team New Zealand and Team Oracle (USA) in the finals. And Team NZ is currently sitting at 6-0 so 3 more races to win for TNZ to take the cup. Every kiwi must be crossing fingers and toes. We  had one heart-stopping moment this morning when the TNZ boat nearly capsized but thankfully came upright again. Go kiwis.

On Monday 9 September we celebrated Ganesh Chathurthi the birthday of Lord Ganesh. The festival lasts for approximately 10 days after which the idols are immersed into the sea. It's one of the grandest festivals and one I enjoyed a lot when I lived in Mumbai. Lord Ganesh is believed to be the remover of any obstacles and has great wisdom. All new ventures or auspicious events begin with a Ganesh pooja (prayer ritual). Here's a picture of one of my Ganesh's but of course we won't be immersing him into the sea. May you all receive many blessings and joy from Lord Ganesh. 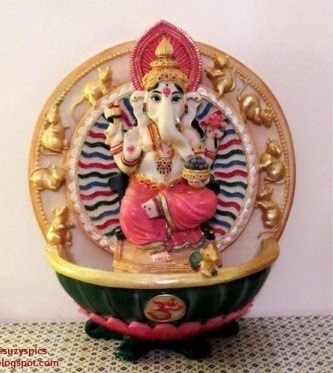 We've had some incredible weather lately - sunny and not too cold. Some spectacular skies too. Here's a picture I took some days ago. Reminded me of fairy wings. 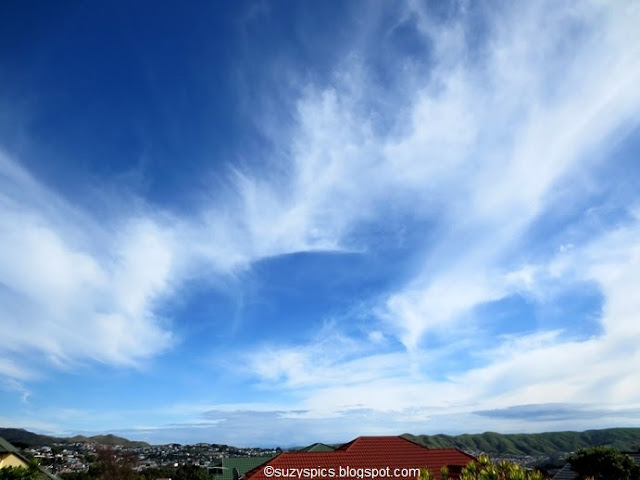