The Old Government Building, Wellington, New Zealand that now houses the Victoria University's Law School, is the largest wooden building in the Southern Hemisphere and the second largest in the world.

It is also the first building in the world to have a smoke free policy. Because of the threat of fire, workers were not allowed to smoke inside the building.

This picture was taken from 16 floors up. Wasn't sure if the pic would turn out clear enough but just took a chance.  (click on the picture to enlarge) 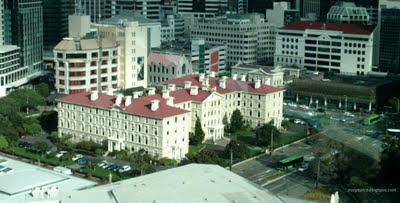